skip to main | skip to sidebar

Dinner tonight: Spicy greens with bulgur and toast from Mr. Crave's bread, followed by strawberry (and peach, in this case) summer cake.
Posted by Eva at 6:45 PM No comments:

To finish unpacking and turn all this detritus of apartment life into the beginning of a home
To get back to cloth diapering
To make friends and influence people
To find a daily rhythm
To make: yogurt, bread, what else?
To be settled, for awhile
To get my shit together
Posted by Eva at 8:06 PM No comments:

Mushroom gorgonzola crepes: and then there were two... 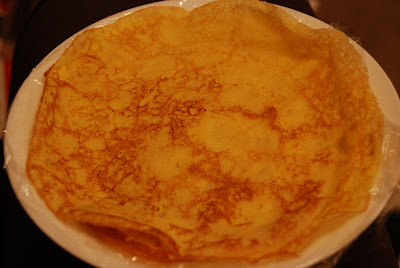 God, I love having my own kitchen. I mean, yes, sometimes I come home from work with absolutely no desire to cook or do dishes or move the week's groceries off the cutting board/counters/stovetop...but then other times I can just make crepes with mushroom and gorgonzola filling on a whim.

These were fast, too, which is part of the reason there's no pretty picture--these were prepped, cooked and eaten in about 45 minutes, which is the time we had between 7:15, when I decided what to make for dinner, and 8:00, when my roommate had to leave to go swing dancing. (I guess that might not be all that fast, but I tend to be a pretty slow cook.) Anyway, seeing as we basically just ate them straight out of the pan (with a side of mixed southern greens) there was no time to take a picture. By the time the filling was gone and the roommate had departed, this was all that was left--and trust me, with a jar of nutella languishing in the cabinet, it didn't last very long.

Here's what I did:

Whisk 1/2 cup all purpose flour, 1/2 cup milk, 2 eggs, 2 tablespoons melted butter, 1/4 cup warm water and 1/4 teaspoon salt until it's as smooth as you can get it. (This will make about 6 crepes, which with a rich filling like this makes plenty for two people). Cover and let sit while you make the filling--30 minutes is best, but if you don't have thirty minutes, you don't have thirty minutes.

Melt a tablespoon of butter in a medium skillet over medium heat. Add 1 clove garlic, minced, and 8 oz mushrooms, sliced fairly thin. Saute until the mushrooms release their juices, then add about 1/4 tsp dried thyme. Once mushrooms are looking cooked, but before they've gotten completely dry, add a few tablespoons of milk and about two ounces gorgonzola (a little more if you want it really gorgonzola-y) and stir around until cheese has melted. Add salt and pepper to taste, remove to bowl. Melt maybe 1/2 tsp butter in a medium nonstick pan. Whisk up your crepe batter. Remove pan from heat, and pour batter into the pan while tilting it around, using just enough batter to coat pan. Return pan to heat, cook until crepe is looking bubbly and set (maybe a minute?) and then flip, top with a few tablespoons of filling, fold and remove to plate. Repeat.
Posted by Eva at 5:27 PM No comments: 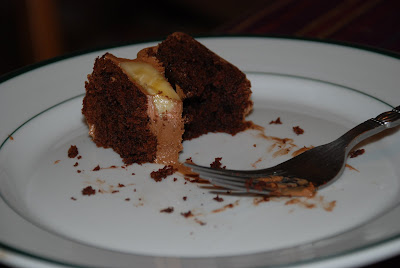 I'm terrible at introductions. Back in the days of school and paper-writing, I'd always leave the introduction (and thesis) until the last minute, preferably the morning the paper was due, so that (having written the dang thing already) I'd know what sort of a point it made and how best to ease into and summarize that point. Also this tended to prevent me from following my inclination to immediately delete whatever I've just written (which, by the way, I blame on a certain 6th grade English teacher whose mantra was You learn to write by writing, which in this case seemed to mean You learn to write by rewriting at least three times, so don't hold any illusions that what you type the first time is worth anything. In my case, I learned to write by drinking too much coffee too late at night and not having anything better to do but spew teenage angst all over a piece of paper, so you'll have to excuse any lingering tendencies, such as rambling and overuse of parenthesis). And because in this case I can't exactly write a whole blog, then go back and write the first entry, the entries are just going to have to speak for themselves for awhile, at least until I can get a large mocha and a spurt of late-night motivation to lay out Precisely Why I Am Writing This Blog. For now, this will have to suffice:

This was the cake I made for my boyfriend's birthday. He wanted chocolate with chocolate icing. I looked through my Maida Heatter books (the queen of desserts!) and decided to use the cake from one recipe and a chocolate buttercream from another. Because I find purely chocolate flavored desserts a little overwhelming, I wanted to use something to mellow things out a bit. Which led to bananas, and since the buttercream recipe called for a titch of rum, I figured that filling the cake with a layer of sliced bananas would be especially lovely. But since I've never made anything that involved keeping sliced bananas hanging around for a few days, I was afraid they would turn to brown mush and ruin the leftover cake.

And so I chickened out, and went for what I foolishly thought at the time to be the "safe" option--the chocolate filling from the cake recipe, which promised to be "creamy" and "pudding-like."

My first mistake was using skim milk--it's what we have on hand in the apartment, and since that tends to be fine for the recipes I usually make, I didn't think this would be any different. The mixture never really thickened, which led to a frantic attempt to thicken it with cornstarch before giving up, stirring in the chocolate, watching the chocolate separate into tiny flecks in the mixture, and finally shoving the whole bowl into the freezer to congeal into a chocolate-speckled mess which, despite its lumpy appearance and jello-like texture, was surprisingly tasty.

And so, bananas it was.

It turned out well. On its own, the cake and frosting were good, although not amazing--I overbaked it a bit and had a bit of difficulty with the mixer when making the icing. The bananas were perfect, and didn't get brown at all. Huzzah!

Adjust rack to center of oven and preheat to 350 degrees. Butter two 9-inch round cake pans and line with baking pan liner paper or wax paper cut to fit. Butter the paper and dust the pans with flour.

Place the chocolate and butter in a small, heavy saucepan over low heat and stir frequently until melted and smooth.

When the chocolate is almost melted stir the sour cream and baking soda together in a small bowl and set aside.

When the chocolate and butter are melted transfer to the large bowl of an electric mixer. Add the sugar, vanilla, salt and beat just to mix. Then add the eggs one at a time, beating until mixed after each addition. Mix in the sour cream and baking soda and then, on low speed, add the flour, scraping the bowl with a rubber spatula and beating only until smooth. On the lowest speed, very gradually add the boiling water, scraping the bowl and beating only until smooth.

The mixture will be thin. Pour half of it into each of the prepared pans.

Bake for 25-28 minutes until the tops spring back lightly when gently pressed with a fingertip. Cool the layers in the pans for 10 minutes, then remove to racks to cool completely. Don't forget to remove the parchment paper!

Chocolate Filling
(I'm sure this would be lovely if you have whole milk, a real double boiler and a bit more skill and experience with cakes than I do...please let me know!)

Scald the milk in a small, uncovered, heavy saucepan over moderate heat.

Meanwhile, place the chocolate in the top of a small double boiler, cover, and place over hot water on low heat to melt. When the cocolate is melted, remove it from the hot water and set aside uncovered.

Sprinkle the gelatin over the cold water in a small custard cup and let stand.

In the top of a large double boiler, off the heat, stir together the flour and sugar.

When the milk is scalded (when it has a slightly wrinkled skin on top) gradually add it to the flour and sugar mixture, stirring well to keep the mixture smooth. Place over hot water in the bottom of the double boiler on moderate heat. Stir constantly until the mixture thickens to the consistency of a thin cream sauce. Cook, stirring, for about 3 minutes more.

Stir the yolks lightly in a mixing bowl just to mix. Very gradually add about half of the hot milk mixture, stirring constantly, and then add the yolks to the remaining milk. Stir well and place over hot water again. Cook, stirring, for 2 minutes.

Remove from the heat. Add the softened gelatin and stir to melt the gelatin, then stir in the chocolate, vanilla and salt. (If you wish, the mixture may be strained but it is not essential.)

Place some ice and water in a large bowl and place the pan of filling into the ice water. Stir occasionally at first until cool; then stir more frequently but gently until the filling is thick enough to spread--it should be like a very thick mayonnaise.

Chocolate Buttercream from Gateau au Chocolat, in the same book as above

Break up the chocolate and place it in the top of a small double boiler over hot water on moderate heat. Cover until partially melted, then uncover and stir until smooth. Remove from the hot water and set aside uncovered to cool slightly.

In the small bowl of an electric mixer cream the butter. Mix in the vanilla, rum, and the melted chocolate. Then add the yolks one at a time, beating well after each addition. Now beat at high speed for a minute of two until the color lightens to a pale caramel shade and the mixture is very smooth and light.
Posted by Eva at 2:42 PM No comments: